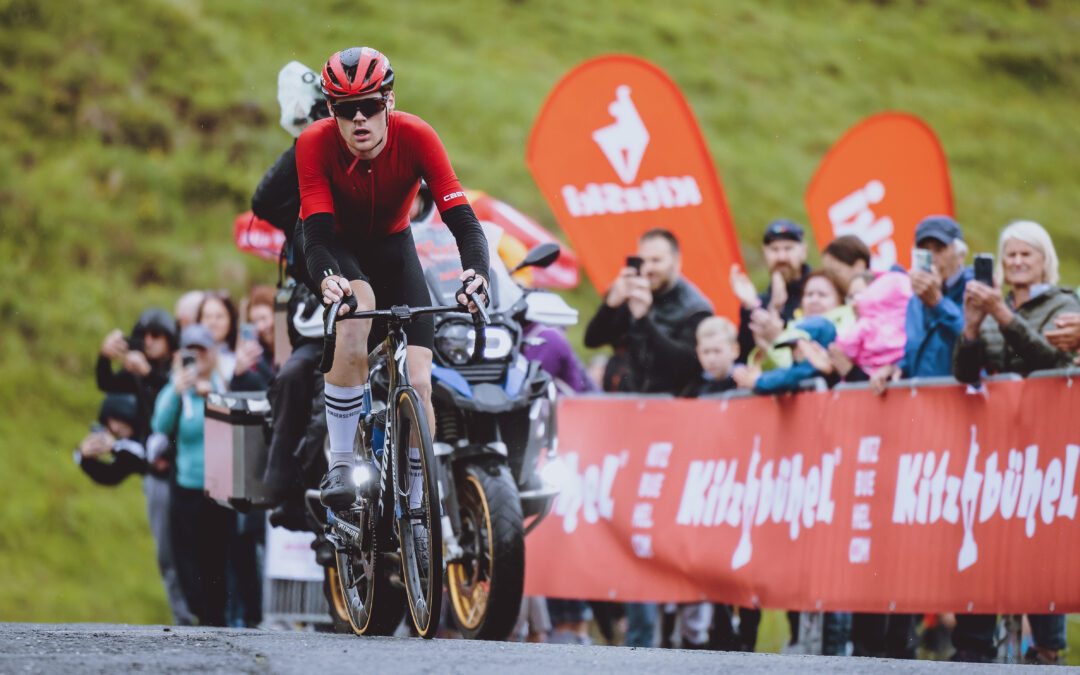 It is shortly before 01:00 p.m. and people are cheering at the Kitzbüheler Horn. Tobias Häckl crosses the finish line of the 1st Kitzbüheler Radmarathon with a time of 06:48:55.9 hours as the overall winner of the day and at the same time the first finisher ever. “It was brutal and really steep,” says the German at the Alpenhaus. It was a hard-fought victory and shortly before the finish he even pushed his bike 1.5 kilometres! Second and third were Häckl’s compatriots Daniel Debertin (06:52:16.9 h) and Alex Schnerrow (06:55:18.2 h). Fastest woman was Janine Meyer with a great time of 07:32:40.3 hours after a rainy 216 kilometres and 4,600 metres of altitude. 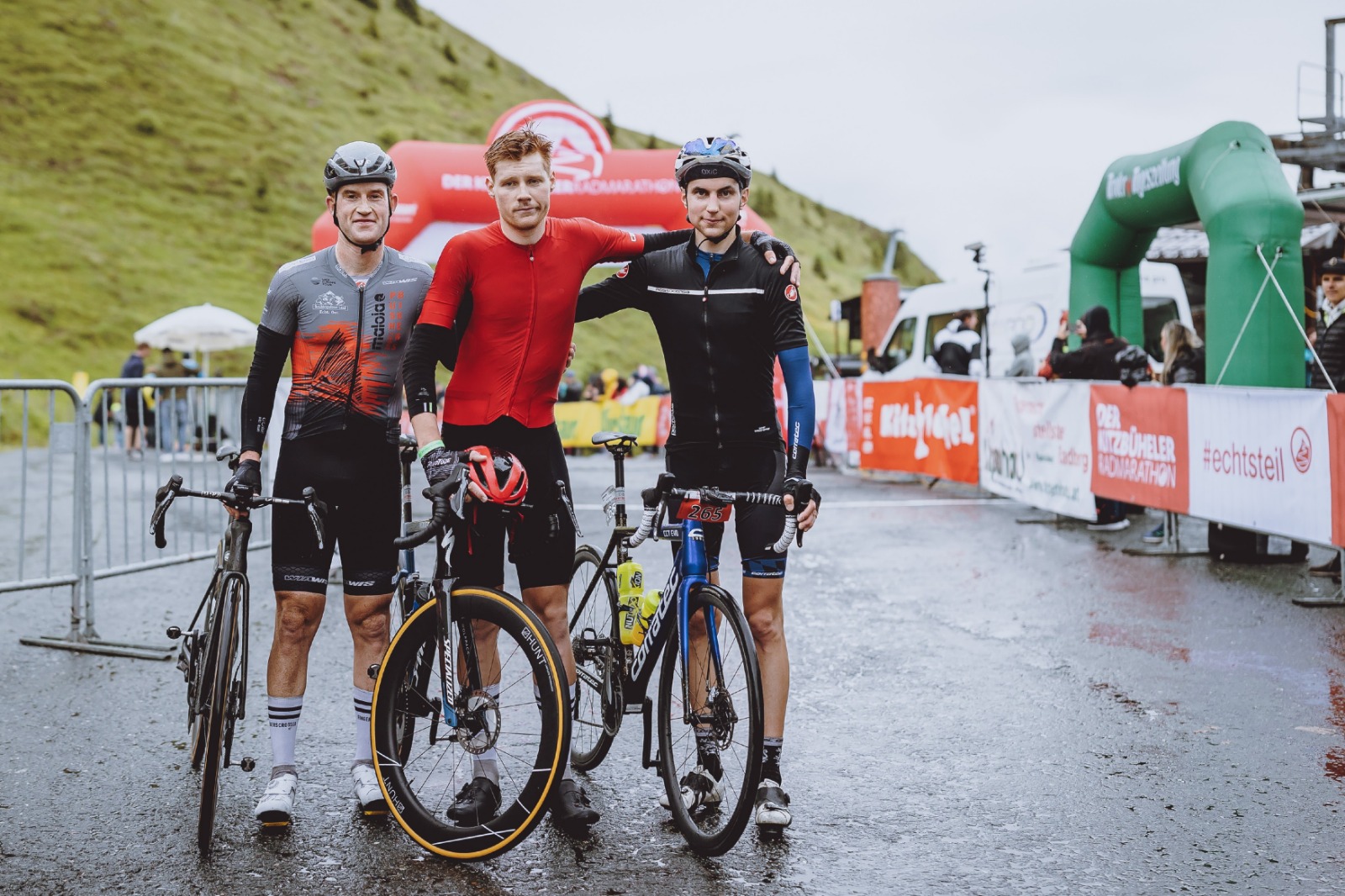 Unfortunately, the day was not blessed with good weather. The start in Kitzbühel’s Vorderstadt was at 6:00 a.m. in heavy rain, which was to accompany the riders until the afternoon. Nevertheless, the motivation in the Vorderstadt was unbroken and the participants were highly motivated.

Victory for Häckl
In pole position the marathon stars Mathias Nothegger, Patrick Hagenaars, Florian Lipowitz (out of competition – pro from Team Tirol), Niklas Kellerer and Benedikt Kendler started the race. The top favourites, however, had to end the race soon – Nothegger because of material defect and Hagenaars because of the brutal cold. At the top of the race Tobias Häckl and Alex Schnerrow broke away after the descent from Pass Thurn and harmonised for a long time. At the Kerschbaumer Sattel they were set by professionals of the Tirol team. “At the Horn I gave everything and immediately broke away at the bottom. The course with this final climb is so crazy! Unfortunately I miscalculated the gear ratio, so I had to run up 1.5 kilometres. I am so happy that I still managed to win,” said Häckl. By the way, the best Austrian was Lukas Kaufmann in fourth place. 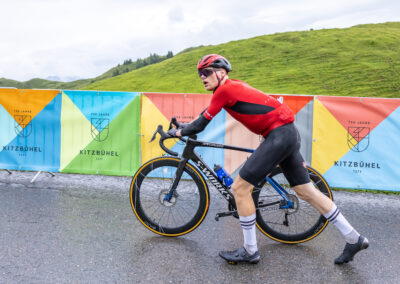 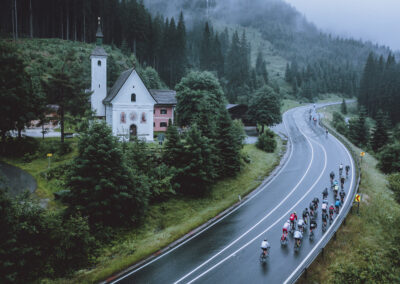 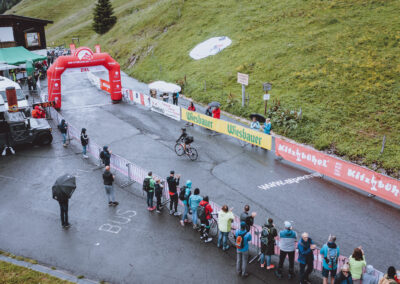 The initiator of the KRM, Mayor of Kitzbühel Dr. Klaus Winkler, in Kitzbühel: “It was a huge challenge for all participants. Despite the adverse weather conditions, everyone was highly motivated. We experienced a great premiere of the Kitzbüheler Radmarathon!”

The finish of the first Kitzbüheler Radmarathon was waiting after 216 km over the Pass Thurn, the old alpine road of Gerlos, further through the Zillertal over the Kerschbaumer Sattel, over into the Alpbachtal further to Brixlegg, Kramsach, over Brandenberg to Angerberg and over the Brixental back to Kitzbühel on the steepest cycling mountain in Austria, the Kitzbüheler Horn! The award ceremony took place on site at the Alpenhaus Kitzbüheler Horn. “A big thank you to the organisers and also to the athletes who made this event so unique,” Franz Reisch from Alpenhaus said in thanks. The rain did not make the 4,600 metres in altitude any easier – nevertheless, the rate of falls remained relatively low.

The race – the premiere – the success
“There are only winners on this day! All those who took part and were able to finish, all the participants and supporters as well as partners and sponsors – my greatest thanks go to them. We managed the premiere successfully – and true to our motto it was #echtsteil!”, organiser Franz Steinberger summed up, also thanking the Arbeiter Samariter Bund Österreich for providing security for the cyclists.

Premium partner Hartisch Hotels was also at the start with many starters. Dr. Christian Harisch sent his greetings from Vienna in advance: “Dear cycling fans, the “Kitzbüheler” Radmarathon will be an event of superlatives. Watch or take part, everyone who is there is a winner.”